This post may contain affiliate links. I may receive a small commission at no extra cost to you that goes towards supporting Fluffy Stitches. All opinions are my own. Full Privacy & Disclosure Policies HERE.

Discover all the secrets to make the knit Grinalda Sweater by Rosa Pomar, a beautiful top-down raglan sweater decorated with simple embroidered flowers, that will quickly become your staple piece for the winter!

Have you ever seen a picture of a pattern and immediately felt that you wanted… no, that you NEEDED to make it?

That happened to me with the Grinalda Sweater. I saw a picture of it, lightning struck, and that was it. Add to that, the fact that it was designed by a fellow compatriot, the Portuguese designer (among many other roles) Rosa Pomar.

And this is the very simple and short story of how I came to make my Grinalda Sweater! 😀

Rosa Pomar is a Portuguese knitwear designer and the owner of Retrosaria.

Retrosaria is a yarn shop and business devoted to minimally processed yarns from the wool of native Portuguese sheep breeds. I mean… WOW!! There are so many things here that I find amazing. I will highlight two, namely, the importance Rosa Pomar has put on developing yarns that are environmentally conscious and friendly. Second, that the yarns come from native Portuguese sheep breeds and therefore helps national breeders, among many others.

Rosa Pomar started knitting when she was seven and her designs are heavily inspired by Portuguese vintage patterns. She also uses complex colorwork to achieve that look. Because of the complexity of the designs, I’ve been mainly an admirer from afar and had never tried to make any of her patterns.

That was until I saw this picture…

I fell in love with the Grinalda Sweater before the pattern was even written. I saw this progress picture of it on Instagram and I knew immediately that I was going to make it! And lucky me, the tester call opened a few days later. I volunteered and was absolutely above the clouds when I was selected as a tester!

The knit Grinalda Sweater uses two strands of yarn held together, a sport weight 100% wool and a lace weight silk mohair. You can either use the same color for both strands, different tones of the same color, or go for a contrasting pair. I knew I wanted to go with the last option and use my favorite pair: grey and pink!

At first, I thought of substituting the wool yarn, but I had a bit of trouble finding a suitable replacement and wasn’t happy with my options. So instead, I decided on using the Vovó yarn from Retrosaria. I had never worked with it before and the first thing I noticed was that it definitely felt like a hard-wearing yarn. This is great because as with all our handmade items, we want them to be long-lasting, and that is what you’ll get from this wool.

Get the Vovó yarn from Retrosaria here.

As for the silk mohair, I already knew which one I was going to use, and that was the Rowan Kidsilk Haze. It’s got a lot of yarn for just 0.9oz /25g, it doesn’t break when worked (or frogged!) and it creates a beautiful halo with a slight sheen. Moreover, it also has such a wide range of colors that the pairing options seem endless! 🙂

Get the Rowan Kidsilk Haze from LoveCrafts here.

You can buy the pattern from Rosa Pomar Ravelry store.

You can also buy the kit from Retrosaria.

When I volunteered to test the pattern, I knew it was a top-down, knitted in the round, raglan sweater. I had never done a raglan sweater before, but it shouldn’t be a problem. I was definitely curious about the flowers. I’m no pro at embroidery, so that would be my biggest challenge.

Or so I thought…

When I received the pattern, I gasped. The pattern included techniques I had never done before such as tubular cast-on, tubular bind-off, and short rows. This was going to be a bigger challenge than I had predicted. But what’s a good test without a few challenges? 😉

Here are the tutorials that worked best for me for all of those new techniques.

For the tubular cast-on, I did a mix from several videos I found.

I used mainly the first tutorial below, however, I didn’t like that it started with a slip knot. So, I used the second video’s technique to start off the work. I also used the second video as a reference to understand how to do the tubular cast-on in the round. The best part about these techniques is that no waste yarn or crochet hooks are required. Yay!

Tubular Cast On here and How to avoid the Slip Knot here.

Now, this was something that blew my mind. I had no idea what these were, but after watching a few videos I got a pretty good picture of why they are such a nice resource. Here’s a video that I found really interesting on the “theory” of short rows. And from the same author, the video on how to work short rows.

How to work German Short Rows in the Round here.

At the beginning of the year, when I was making Square Two of the Traveling Knit Afghan I learned how to make M1R and M1L. However, when I was making this sweater, because of the short rows, I had to do these on the wrong side of the work. And when you’re doing them on the purl side, the technique is slightly different.

How to M1R and M1L on the right and wrong side of the work here.

For this technique, I’ll also recommend two videos. The first one shows how to work this technique. The second shows a little detail to improve the finishing of the sweater. This detail is as simple as using a stitch marker to identify the first two stitches. After you finish the round, you’ll work these two stitches and this little thing will make the fastening invisible. Pretty neat!

For this one, Rosa has got you covered. She filmed a quick video showing how she embroidered the flowers. You’ll have access to this video when you buy the pattern. 🙂

Final thoughts on the Grinalda Sweater

This test proved more challenging than I thought, but it was OH SO WORTH IT!!!

My knitting skills bloomed with this test (pun intended). I learned so much by doing this sweater, that when I weaved in my last end I felt absolutely accomplished. I felt so proud of myself for all I achieved and learned and for the stunning pattern that I had just made.

It’s not a pattern for every knitter. It does have more advanced techniques than you might have expected, but if you are feeling adventurous, then go for it. I guarantee that you’ll feel amazing! 🙂

Get your pattern from Ravelry here or grab the kit here!

Hey there! I'm Susana a Portuguese girl living in Australia. I'm into crochet, knitting, taking one day at a time and sharing all that with you! Check the About Me for more details and feel free to drop me a line, anytime. See you around the blog! 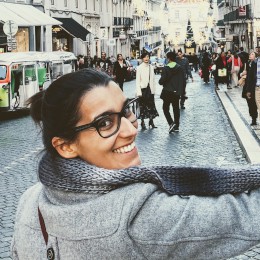 Hey there! I'm Susana, a Portuguese girl living in Australia. I design garments and accessories for women who want to embrace slow fashion and make their own clothes, one stitch at a time.

Check the About Me for more.

See you around the blog!